A rather particular leveling is carried out by a machine used above all for large movements of snow in the high mountains and, albeit to a lesser extent, to push the silage between the walls of the trenches. The latter is normally the only agricultural use for which a snowcat can be used. Not in this case though. A Prinoth Leitner LH 500 is used for a large earth excavation, to speed up the work of two Fendt equipped with a level with laser control. The Leitner, specially adapted in some features for use in agriculture, is equipped with an 11,970 cc MAN D 2866 LE 102 6-cylinder in-line engine capable of delivering 360 hp rated at 2,000 rpm. The maximum torque is 1,540 Nm at 1,300 rpm. The fuel tank has a capacity of 200 l. The hydrostatic transmission consists of two speed ranges (one standard and two optional), which allow travel up to 18 km / h. The front attachment is capable of lifting up to 1,500 kg, while the rear three-point linkage is capable of lifting 1,000. The front blade has a maximum width of 5,205 mm, while when closed it narrows to 4,405 in a perfectly horizontal position, even less if you move it obliquely. The rubber track, for better work when it is necessary to step on the silage, has the possibility of vibrating, like the stone crushers, to increase the effect of the weight on the ground. Dimensions: overall length with blade 6.9000 mm, height 2.950, overall width of the roadway 2.980; weight with front blade: 8,100 kg. The daily consumption of diesel is around 3 quintals for this application, while in the trenches in a long day of work you can consume on average 200 l. Machines: AURORA agricultural processing and third parties of BASSANI GIACOMO. Date: 9 - 05 - 2015. Location: San Colombano al Lambro (LO). A special greeting and thanks go to the snowcat tractor driver for his availability, and to his owner Giacomo Bassani for allowing him to film it. 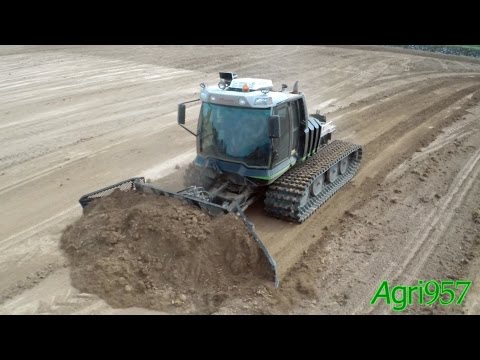 Amazing Transporting By Side The Liebherr 964 - Fasoulas Heavy Transports

Most Satisfying Machines and Ingenious Tools ▶20

Pulling into a main sewer pipe ~ pull the sewer pipe